2021 is a year of evolution for the whole industry. Competition in the LiDAR market is in full swing, with various players making moves; With "Metaverse" going viral in the industry, the whole AR/VR industry is shrouded in an atmosphere of urgent need to take off. In this year, Camsense has made great efforts to carry out in-depth R&D, exploration, operation and service in robotics, AR/VR and other fields.

In 2021, Camsense officially released Camsense T3 dTOF LiDAR to the public. This product is a new generation of dTOF LIDAR solution launched by Camsense in two years of grinding, and it is also the only TOF radar that solves the problem of close range inaccuracy in China at present. Its biggest feature is that it can achieve millimeter-level positioning accuracy at close range, and the range measurement within 0.6m can reach 3mm-level accuracy. Compared with the same type of consumer-grade TOF radar in the current market, the close range measurement accuracy of T3 has been improved by 80%, which greatly improves the problem of close range error. The outstanding ranging performance of the T3 has ignited industry-wide expectations upon its release, and has received orders from many customers, with positive market performance all the way to the top.

In 2021, Camsense has gained a lot of recognition on the customer side. While expanding new business, Camsense continues to uphold the corporate mission of "focusing on customer needs and creating maximum value for customers", providing quality products and services to customers such as Xiaomi and Dreame. As we enter the new year 2022, Camsense will continue to carry out this service mission and continue to iterate on innovative features to meet the needs of the market and every customer.

In July 2021, Camsense officially joined the Roborock supplier ecosystem as a LiDAR supplier for Roborock's floor sweepers, marking another milestone in Camsense's customer outreach. This partnership is not only a recognition of Roborock's product innovation, but also a recognition of the quality of Camsense's products. The CEO of Camsense was also invited to the Roborock Partner Conference 2021, demonstrating Camsense's position as a leading LiDAR supplier.

Being Invited to QualcommXR Eco-Partner Conference

The past 2021 has been a "surging" year for the VR/AR industry, with the flood of the times sweeping the industry through huge changes. In the background of VR/AR industry's development momentum, Camsense has received high attention from the mainstream industry market with its years of technology cultivation in XR field. In September 2021, Camsense was invited to attend the "Qualcomm XR Eco-Partner Conference" and shared its latest R&D achievements based on XR spatial positioning technology with many mainstream companies and industry experts from XR field such as Goertek, OPPO, Pico, etc., which triggered a warm response.

In the XR development process, Camsense also got the Qualcomm XR platform license at the end of 2021, officially becoming a Qualcomm XR domain interaction technology partner. Camsense will later provide 6dof visual positioning interaction technology to partners through Qualcomm platform. As a leader in chip technology, Qualcomm has a strong track record of enabling the global mobile ecosystem and emerging vertical industries, and its influence on the industry is evident to all. The licensing of Camsense by Qualcomm further demonstrates Camsense's R&D strength and innovation capability in XR.

In 2021, Camsense was also quite popular in the capital market, completing three consecutive rounds of financing.

- In April, Camsense completed nearly 100 million RMB B+ round of financing

- In August, Camsense completed nearly 100 million RMB B++ round of financing

On the whole, the total amount of three Series B financing completed by Camsense in 21 years has exceeded 200 million yuan. The three consecutive rounds of financing not only reflect the confidence of major capital institutions in Camsense's development prospects, but also reflect the high recognition of the capital market on Camsense's business model, product application and future growth.

Reviewing the past is to better look forward to the future

A new era of technology services is coming.

Camsense will continue to cultivate visual-spatial positioning technology and

Continuously increase the market of LiDAR and AR/VR applications.

Deepen the development of partnership

Camsense will continue to develop its vision spatial positioning technology

Continue to invest the market of LiDAR and AR/VR applications

Deepen the development of partnerships and eventually

Emerging as the industry leader of a new era. 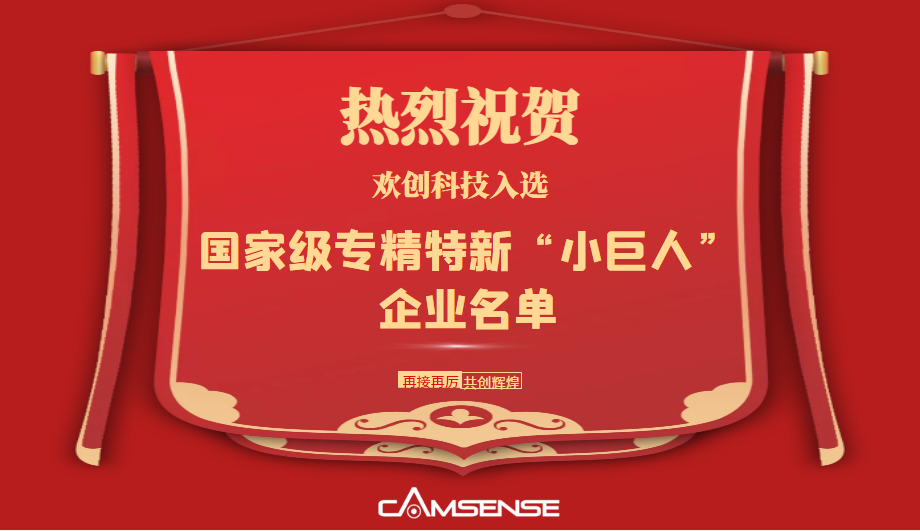