In 1916, Einstein proposed the theory of stimulated emission of light, and human beings began to understand laser light. In the following decades, with the advancement of science and technology and the development of the times, human beings have gradually deepened their understanding of lasers. This facility, which was only used in military and other fields, began to appear in front of the public.

On the evening of September 15, the world's first mass-produced smart car equipped with lidar, the Xiaopeng P5, was officially launched, and this may also mean that high-end smart security has entered the actual implementation period and has been put on the agenda.

In fact, in addition to being used in the automatic driving of new energy vehicles, there are frequent happy events in the field of lidar this year. In August, Japanese car lamp manufacturer Koito invested more in Cepton, an American lidar company. Coincidentally, the domestic lidar head supplier "Camsense" has also completed three rounds of B rounds of financing this year, with a total financing amount exceeding 200 million yuan.

Why does this once forgotten facility attract so many brands?

After nearly 44 years of technological progress, until 1960, TH Maiman developed the first laser transmitter, which also opened the prelude to the use of lasers by humans.

In 1969, when the United States landed on the moon for the first time, a retroreflector device was installed on the surface of the moon, and a laser was emitted from the earth to the device.

In the late 1990s, with the development of artificial intelligence, the concept of autonomous driving was also progressing rapidly. Since 2005, there have been more and more instances of lidar being used in the automotive field. Between 2004 and 2007, foreign institutions organized The DARPA Self-Driving Vehicle Challenge uses lidar.

Subsequently, Velodyne, which started with audio, turned into a lidar manufacturer. Since the invention of 3D real-time lidar, it has launched as many as 64-line lidar products.

As of 2005, more than 80 lidar companies have been established, many of which are betting on new technologies, stimulating a high degree of technological diversity in the lidar field.

In 2010, Google, which began to deploy driverless cars, also chose the lidar provided by Velodyne. In the following ten years, with the prospect of lidar being optimistic and the attention of lidar increasing, more and more companies have started the research and development of vehicle lidar, and a number of foreign companies such as Velodyne LiDAR, Luminar, Ouster, Valeo and other head lidar companies also have "gold rush" players such as Huawei, DJI, and Camsense in China.

Although, from the perspective of the application of LiDAR, the fields of application are getting wider and wider, and various fields such as military, medical, communication, industry, aviation, etc. have taken advantage, but in terms of maturity and growth rate, the automotive field is the fastest. Especially in the context of the pandemic of new energy vehicles and smart cars, companies developing autonomous driving have emerged one after another, which has also accelerated the "popularity" of lidar, including Baidu, Uber, Cruise, and more.

At present, the entire lidar market is crowded. According to Qingtong Capital statistics, 46 companies will enter the market in 2020 alone, including many star companies. However, the current market concentration is not high, and start-ups still have the opportunity to run out.

"Conspiracy" for Tech Giants to Enter the Market

The advent of the Internet era and changes in lifestyles, especially people’s higher requirements for intelligent hardware, have changed people’s cognition of traditional life. Various new concepts such as smart cities and smart logistics have been proposed, which has increased the awareness of LiDAR. Applications.

According to Yole's forecast, the lidar market will reach US$5.7 billion by 2026, and the compound annual growth rate will reach 21% from 2020 to 2026. In the segmented market, the fastest growth rate of smart cities will reach 35%; self-driving taxis The growth rate of cars and buses is 33%; intelligent logistics is 23%.

In addition, automatic driving and advanced assisted driving capabilities have great requirements for the ability to predict and identify the surrounding environment and obstacles ahead. Compared with the current mainstream detection equipment, lidar generally has a longer effective detection distance, which is just right It meets the needs of unmanned and intelligent driving.

Especially due to environmental factors, people are more inclined to private travel in recent years, and the reduction of traffic jams will also lead to the acceleration of the trend from public transportation to private driving. More attention is paid to the development of lidar, which is beneficial for long-term development. . 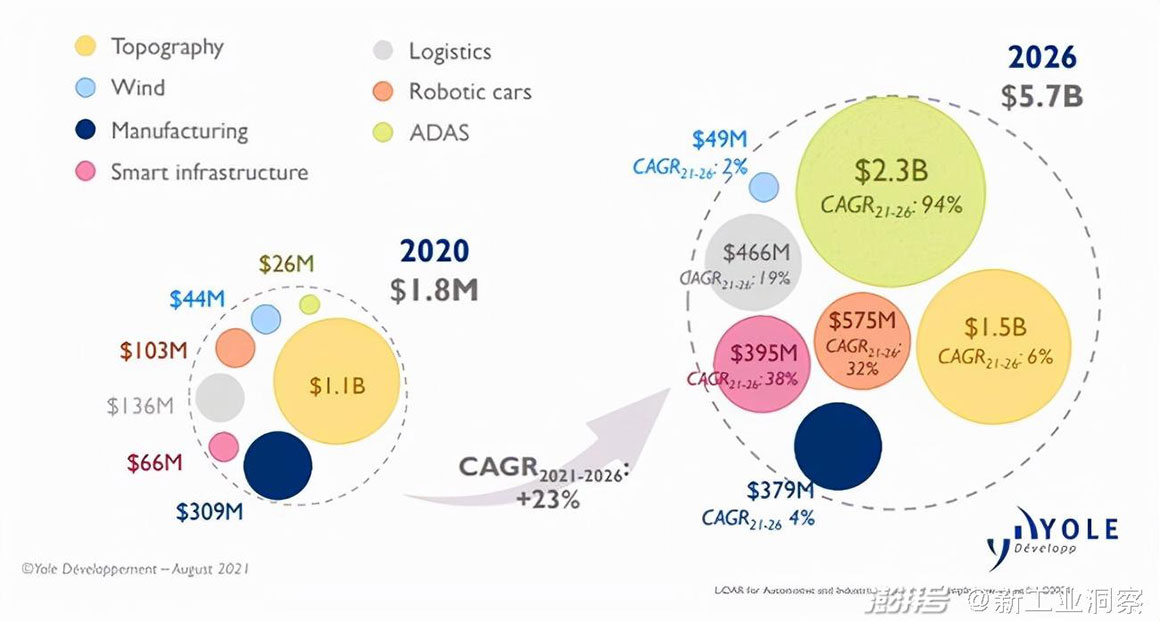 At present, the growth rate of the automotive lidar market has reached 111%. By 2026, the market size will exceed 2.3 billion US dollars, accounting for nearly 49% of the total market size. Among them, lidar used in ADAS will account for 41%. It is standard for production cars, and the battle with the pure visual route has been won or lost.

On the other hand, Celgene has become an absolute hotspot in domestic investment, entrepreneurship and society in recent years. Smart transportation and vehicle-road collaboration have attracted more attention. At this time, various sensors, such as lidar, are needed. , the camera provides environmental information.

As an intelligent transportation terminal sensor, the performance of lidar determines that it also has an indispensable position similar to L4 autonomous driving, and has a huge application prospect in the vehicle-road coordination side.

Finally, the market tends to be rational, and technical solutions have become the focus of attention. For example, IDG Capital’s investment in Beixing Photonics and Lightspeed China’s investment in Hesai Technology are mainly the lidar technology solutions behind the companies they fancy. key to entry.

At present, solid-state lidar is a recognized development direction in the industry. After continuous optimization, the volume of the improved solid-state lidar has been significantly reduced compared to the original device form. Even the product volume of XenomatiX has been reduced by 3 times, but the energy consumption It is only half of the original, and the functions and effects have been increased by 3 times. More importantly, the price of early mechanical lidars was often in the hundreds of thousands or even millions. Now in the solid-state industrial chain system, the quality and price of lidars have begun to tend to a reasonable range, which is also a big deal. One of the factors that factories love lidar.

The tide is on the waves

In fact, although the industry players are slightly crowded, in terms of industry concentration, it is currently not high.

Angus Pacala, founder and CEO of Ouster, said, "In the next five years, only three to five lidar companies will survive." It seems that this sentence is a bit alarmist, but it also reflects the continuing trend of industry consolidation.

Judging from the latest data released by Yole, Valeo, which has the highest market share at present, does not exceed 30%, while other industry players only have Sagitar Juchuang second with 10%, and the rest of the players have a single-digit market share. It shows that the market structure is still relatively fragmented, and many players still have opportunities. The landing of lidar is of extraordinary significance. For the domestic lidar industry, entering the stage of mass production marks the relative maturity of lidar technology.

An obvious sign is that the reason why Musk was not optimistic about lidar two years ago was because the price was too high at that time, which would lead to an increase in the cost of the whole vehicle, but with the current trend, the price of lidar will become cheaper and cheaper. .

However, looking at the entire field, the large-scale implementation and full-scene application of domestic lidars are still subject to some factors and problems. From an objective point of view, dealing with unfavorable conditions is the difficulty that lidar must face.

Taking the automotive field as an example, this type of field requires LiDAR to have depth sensing, and at the same time, it can realize the intelligent fusion of many sensors in the car, realize the differentiation of software or applications, and can use the same number or fewer sensors to complete more advanced technologies. It can detect the whole scene "in a flash", provide different fields of view, different ranges, different resolutions and frame rates, and be more flexible.

After 100 years of development, lidar is still evolving. Under the "big waves and sand" of the times, companies are urged to change to higher levels and stricter specifications. Today, the pattern of lidar is still undecided, and among the many remaining players, "Qianlang" "And the "back waves" are still in constant competition.

However, it can be predicted that with the improvement of technology and application scenarios, one day in the future, lidar will serve human beings better, which will also promote the positive development of the whole society. 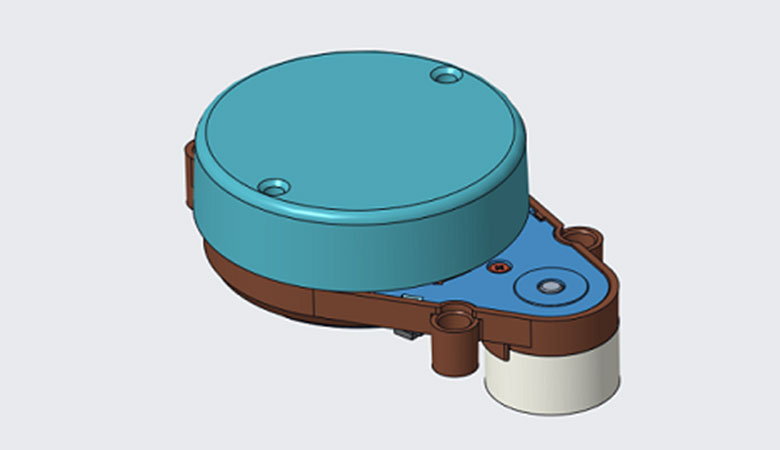